This page will serve as a repository of information about the Texarkana Gunslingers, which played during the 2008 and 2009 Continental Baseball League seasons.

First is an article honoring the late Scott Feller, player with the Gunslingers in 2008 and 2009:  https://www.miracleleague.com/the-scott-feller-memorial/

Article on the current coaching status of Chris McKnight, the team’s manager for the second half of the 2008 season and all of the 2009 season:  https://tuckahoesports.org/staff/chris-mcknight/

Article from Baylor University’s website about the wife of Frank Snyder who was involved in the business operations of the Gunslingers:  https://www.baylor.edu/lariatarchives/news.php?action=story&story=54150

Found a June 2009 article recapping a game between the South Louisiana Pipeliners and the Gunslingers:  http://www.texarkanagazette.com/news/sports/prep/story/2009/jun/27/gunslingers-edge-south-louisiana/151144/

Mention of a pre-season exhibition game between the Blue Thunder and Texarkana Gunslingers in Greenville Texas: http://www.heraldbanner.com/sports/article_0f7ee100-3058-5421-9c8e-aa2f48ae89c7.html

We found some news headlines from the archives of the old Gunslingers’ website from late 2008 through early 2009:  http://web.archive.org/web/20090222201819/http://texarkanaprobaseball.com/news/index.html

Fargo-Moorhead RedHawks 2008 article about Billy Weitzman winning the Northern League’s Rookie Pitcher of the Year award that season.  He played for the Gunslingers earlier in the 2008 season, as it is mentioned in this article:  http://www.fmredhawks.com/news/index.html?article_id=6

Articles including game recaps and player information from the 2008 season:  http://texsportpub.blogspot.com/search/label/Texarkana%20Gunslingers

May 2009 article about the upcoming start to the second season for the Texarkana Gunslingers:  http://www.texarkanagazette.com/news/sports/prep/story/2009/may/13/gunslingers-start-second-seasthursday-spring/156988/

July 27, 2008 article from Enid Oklahoma about Anthony Edwards’ performance to that date:  https://www.enidnews.com/sports/local_sports/edwards-tearing-it-up-in-pro-ball/article_c0468faf-4017-56c5-b8c3-4efbebc94302.html

Found a link to a 2009 team photo on Chris McKnight’s Baseballvisionprogram.com website  (Here is the link)

Found another image on Flickr, likely from 2009 between the Gunslingers and Big Bend Cowboys: 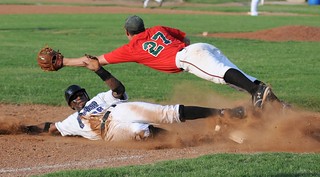 Here are two images (front and back) of a Texarkana Gunslingers jersey which was available on eBay at the time of this update: