This page is dedicated to the South Louisiana Pipeliners independent baseball team.  It played one season, during the 2009 Continental Baseball League season.  The team only played a few home games with the majority being on the road that year.

When the league first announced the team, there was a mistake in the memo sent so the team’s name initially went out as the “Pipe Fighters” instead of the “Pipeliners”.  Here are the two links:

Article about the team playing games in Morgan City:

Aug 2009 article about the Pipeliners game against the Coastal Kingfish:

Article about the Pipeliners folding and no longer playing in the CBL:

2011 article mentioning Kyle LaMotta who was on the Newark Bears that season.  Mentions the Pipeliners and has a link to his Baseball-Reference stats:  https://randombaseballstuff.com/2011/05/19/raines-jr-returns-to-newark-to-play-for-his-dad/

Article about fans “passing the hat” after a home run during a Pipeliners “home game” against the Coastal Kingfish at Acadian Park:  https://www.iberianet.com/sports/an-old-tradition/article_34d15ab9-5437-5944-ae37-d7eed0a9b1e5.html

Game recap from late-June 2009 from a game between the Pipeliners and Texarkana Gunslingers:  http://www.texarkanagazette.com/news/sports/prep/story/2009/jun/27/gunslingers-edge-south-louisiana/151144/

Mention of Bryant Perdomo on the Pipeliners:  https://www.bubruins.com/sports/bsb/proalltime

Mention of Danny Chaffardet pitching in May 2010 for the Calgary Vipers:  http://www.tucsonsentinel.com/sports/report/052610_torosgetswept/toros-miss-win-by-inches-get-swept-by-champions/ 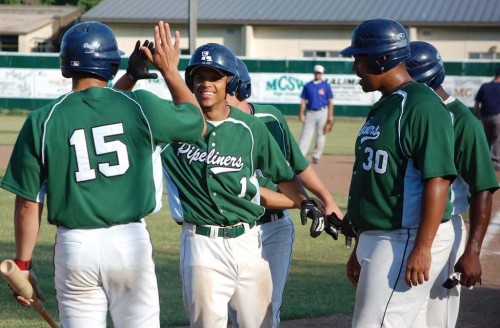 Here is the playlist of all videos pertaining to the Pipeliners:

Archive.org (Wayback Machine) has a little bit of content still archived from the Pipeliners website. The last snapshot/archive was from May 23, 2009: https://web.archive.org/web/20090523094103/http://www.slproball.com/

Here is some content which is still available, but unfortunately the images/photos which were on SLproball.com website at the time are not visible. If we are able to recover them one day then they will be added to this page.

The South Louisiana Pipeliners are an independent prospect team filled with some of the top professional baseball prospects from around the globe.  The players are hand picked by our professional scouts to train and showcase their baseball skills so that we can develop a “Pipeline” of players into major league affiliations and other professional baseball leagues.  The Pipeliners will compete in a 60 game schedule in the Continental Baseball League for the 2009 season.  The team will be based out of Morgan City, LA from May 6 thru August 30th where they will use S.L. Sports Academy as the official training center of the South Louisiana Pipeliners.

David Angeron, of Morgan City, Louisiana, spent 3 years in independent professional baseball including a league championship with the 2002 Pensacola Pelicans. In 2003, 17 of Angeron’s players advanced, receiving contracts to play at a higher level of professional baseball. Prior to coaching professional baseball, David spent 5 seasons as a high school baseball coach which included 5 play-off appearances, 3 district championships, and 2-time “Coach of the Year” honors.  Angeron has now returned to his home town where he is a scout for the Milwaukee Brewers and owner of S.L. Sports Academy (www.slsportstraining.com)

Sammy Torreira :  A Cuban American from Miami , has worked with the Global Scouting Bureau as a regional scout for college and professional baseball since 2001.

In 2002 Sammy was the General Manager / Player with the Selma Cloverleafs of the Southeastern Professional Baseball League.

In 2003 Torreira was a Player/Coach/Administrator with the Montreal Royals of the Canadian Baseball League under 12yr Major Leaguer, Gary Roenicki.

He currently works as an ASSOCIATE SCOUT for the Milwaukee Brewers and an Instructor/Coach for Light’s Out Baseball Academy in San Antonio, Texas.