A big thank you to 2008 McKinney Blue Thunder online radio broadcaster, Dave Michaels (North Texas Sports Network), for his finding and sending to us the only archived game broadcast we have of the CBL at this time (Feb 1, 2021).  Despite online radio broadcasts happening for the league throughout its four-year history (2007 to 2010), for some reason the archives of the broadcasts are lost to history at this point.  Dave was able to get a MP3 audio file of a game he jointly broadcast with David Crane (Bay Area Toros) during the 2008 season.  The game took place in McKinney Texas and was the Toros’ official “game of the week” broadcast with its local radio agreement partner.

Should there be any copyright or other legal concerns where this needs to be taken down, then please contact us and we will remove it.  Otherwise, if you have (or had) legal rights to this game’s broadcast then please consider letting us keep it posted live as it is the only game broadcast archive which proves that the CBL did, indeed, play during its four year history.

The link below is a Dropbox link, so click the link and you should be able to listen to the two-hour, fifty-minute broadcast without having to log into Dropbox:

Here is a 2007 spring training roster article with player photos and other photos from before the 2007 season:

Article about Daniel Cox being signed by the Toros:

May 2007 Houston Chronicle article about players getting ready for the start of the first CBL season, with player quotes:  https://www.chron.com/neighborhood/baytown-news/article/Toros-gearing-up-to-play-ball-in-Bay-Area-w-1834261.php

Press release about the start of the Toros from 2007:

Article about Robinson Stadium written during 2009 (the last season for the Toros): http://www.baseballroadtrip.net/RookieIndependent/independent/continental/bayareatoros/texascity.html

2007 & 2008 TSRN online radio schedules for the Bay Area Toros (links do not lead to actual audio files, so this is just for the schedules):  http://tsrnsports.com/old/webcast/2007-08/SpecialEvents/2007-archive-toros.htm

Photos from the Toros first victory in League City, Texas in June 2007:  http://www.photodave.net/2007album/06jun/toros.htm

July 25, 2007 article about games from the CBL that series plus quotes from Jim Bolt about the stadium at Clear Creek High School, the first scheduled series in Texas City (which were supposed to be against the Lewisville Lizards, but all 3 games got rained out), and what possible expansion was being discussed at the time:  https://www.chron.com/neighborhood/article/Scoring-high-low-Toros-lose-ground-9559156.php

July/August 2008 in-depth article about life on the road for the Bay Area Toros during a series in Robstown against the Corpus Christi Beach Dawgs:  https://www.chron.com/neighborhood/baytown-sports/article/Bay-Area-Toros-try-to-thrive-at-low-budget-1770915.php

Found the archive.org (Wayback Machine) November 16, 2007 snapshot of the BayAreaToros.com website which lists the final scores for all Toros games that year.  Most of clickable links for each game show the actual box score as well.  Here is that snapshot link:  2007 Bay Area Toros games and box scores

As above, here is the November 2007 snapshot of the final 2007 25-man roster for the Toros, and many of the player specific pages are still able to be clicked to get a little bio on each player:  2007 Bay Area Toros players

Article about Wildcat Stadium (Clear Creek High School) including photos from BallparkReviews.com — these were taken long after the Toros left for Texas City after the 2007 CBL All-Star Game:  Click Here

Article about Joel Hartman making the 2009 CBL All-Star Game:  Go To This Page

Article from May 2007 about Toros’ exhibition games against local Houston-area semi-pro teams:  http://texsportpub.blogspot.com/2007/05/bay-area-toros-go-to-1-1-in-exhibition.html

Resource with many Bay Area Toros recaps from 2008 + 2008 CBL players & pitchers of the week:  http://texsportpub.blogspot.com/search/label/Continental%20Baseball%20League

July 2009 article from the Houston Chronicle about the business side of the Toros and how the economy affected attendance numbers plus what was done to attempt to increase ticket sales:  https://www.chron.com/neighborhood/baytown-news/article/Attendance-on-the-decline-at-Bay-Area-Toros-games-1740942.php

Robbie Tolan made national news after being shot by police in December 2008 while outside his family’s home in Texas (Wikipedia article here).  Click the graphic below to discover more about his book “No Justice,” with a foreword by Ken Griffey, Jr.  Below the book graphic is a 2018 video featuring Tolan on a Houston-area television show.

—>  Update on the coaching status for Ben Wharton (now at Chattanooga Christian): https://www.ccsk12.com/baseball

Here is a playlist with several video clips featuring the Bay Area Toros:

Video from Texas City with Phil St. Amant against the Texarkana Gunslingers:

Here is a video from 2008 featuring Bay Area Toros at bat against the McKinney Blue Thunder at Gabe Nesbitt Field (Ballfields at Craig Ranch):

We found several photos of the Toros from 2008 and 2009 on Flickr.com.  Most were taken at Robinson Stadium.  Various photo credits are to be made, so each photo on Flickr should have the credits.  If any are missing then please contact this website and we will add the proper credit.  Thank you. 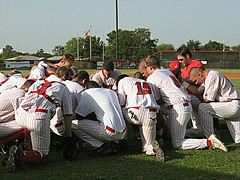 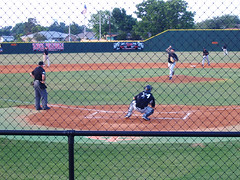 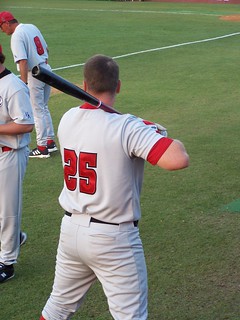 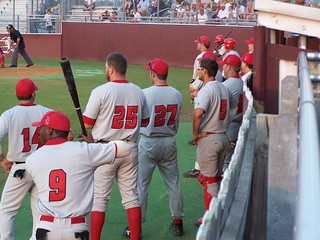 The following 20+ photos were taken at Robinson Stadium in 2008.  Here is the information provided about this set of photos: Played at Robinson Stadium, Texas City, TX on May 31, 2008. The Toros (5-4) were defeated by the defending champion Blue Thunder (7-2) 9-2.

We also found a portfolio of photos taken by “Kirk Sides” (please click this link to see his Flickr account and portfolio of Toros photos). Each photo in that album will be embedded on this site, but full credit and attribution goes to Kirk for these photos from the 2008 Toros’ season. If he wishes to have these photos removed (or given some other attribution or photo credit) then please have him contact us and we will honor whatever he wishes regarding these photos. They are being added via embedding from Flickr, and there is no attempt to monetize his efforts. Thank you to him for keeping the Toros photos up on his Flickr account for all these years!

Here is another album on Flickr, this time from a May 15, 2007 pre-season exhibition game at Clear Creek High School for the Bay Area Toros. Thank you to “Guppyman” for keeping this album up on Flickr for all these years:

The photos you see in this section are all given 100% credit to “Guppyman” so please subscribe and/or share his public photos on Flickr in return. The “About” page for Guppyman can be found here: https://flickr.com/people/guppystormdotcom/

The following photos were downloaded from the Wayback Machine (archive.org) snapshot of this page: http://www.photodave.net/2007album/06jun/toros.htm

The PhotoDave.net website (at the time of this edit/update to the Bay Area Toros page on March 11, 2021) is down, so the original link listed earlier does not work. It is unknown whether or not the PhotoDave.net website will come back, so all photo credits in the gallery below are the sole credit of PhotoDave.net. If “Dave” or other party which has the rights to these photos wants them removed then please contact us and we will remove them and/or keep them up on this page with whatever attribution/credit (and link) is provided to us. The photos are here purely for historical/reference purposes, and there is no intention to monetize them for our own benefit in any manner.

Here is the archive.org (Wayback) link confirming the photos belonged to the PhotoDave.net website, and the photos are from June 1, 2007 when the Bay Area Toros hosted the Tarrant County Blue Thunder. The game was at Clear Creek High School in League City, Texas – before the Toros moved to Texas City’s Robinson Stadium for the 2nd half of the 2007 season.