The first CBL Home Run Derby and All-Star Game took place over two days in July, 2007 in League City, Texas.  Both events were at Clear Creek High School, which was the final CBL event there as the Bay Area Toros then moved to Texas City to finish out the season.

Here is the local newspaper’s recap from the 2007 All-Star Game, including quotes from managers Royce Holder, Jim Bolt and Curtis Wilkerson:  http://www.chron.com/neighborhood/article/North-takes-All-Star-game-9556059.php

This was the Houston Chronicle’s article before the All-Star Game, Home Run Derby, and Old Timers Game – discussing the rains which plagued all CBL teams (and other independent league teams) during the 2007 season:  https://www.chron.com/neighborhood/article/All-Stars-hope-for-dry-field-9546665.php

This write up of Noah Scott game from the Archive.org (Wayback Machine) snapshot of the BayAreaToros.com website from November 16, 2007.  It also includes the 2007 CBL home run derby results.  The image of Noah with Ron Baron and Bob Ibach is below in the Images section.

From an archive.org snapshot of the old Tarrant County Blue Thunder website (click here), the team had a press release go out about its 11 players selected to represent the Blue Thunder for the first CBL All-Star Game.  Here are those players:

From an archived page of the old Texas Heat website (click here), we found the complete 2007 CBL All-Star Game rosters:

Here are some photos and videos from those two nights. 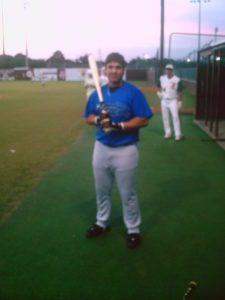 The above 3 photos (Will Smeltzer, CBL 2007 South Team for All-Star Game, and Karl Krailo earning the 2007 CBL All-Star MVP award came from an archive.org snapshot of the 2007 version of the BayAreaToros.com website.  No photo credits were given, so if the photographer(s) wish to get credit then simply contact this website and we will give credit for his/her photo(s).  Thank you).

Thanks to Nick Enciso (Texas Heat 2007 team) for these photos from the 2007 CBL All-Star Game: